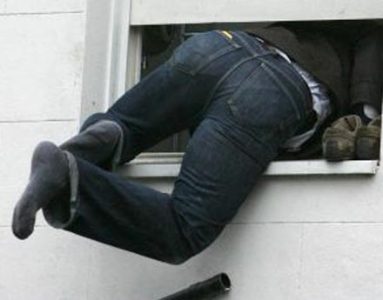 A few days later, when Jesus again entered Capernaum, the people heard that he had come home. They gathered in such large numbers that there was no room left, not even outside the door, and he preached the word to them.  Some men came, bringing to him a paralyzed man, carried by four of them.  Since they could not get him to Jesus because of the crowd, they made an opening in the roof above Jesus by digging through it and then lowered the mat the man was lying on.  When Jesus saw their faith, he said to the paralyzed man, “Son, your sins are forgiven.” (Mark 2:1-5)

When I was a student at Rutgers, Muhammad Ali once came to give a talk in Records Hall. The Hall quickly filled; then the entrances were guarded, and no one more could enter. However, one enterprising young man slithered through an open side window, jumped in and landed on the floor. Unfortunately for him, he was grabbed by a dean, who asked him, “Is that how you usually enter a building?” and promptly escorted him back outside….

Now, the usual moral of this kind of story would be something like “If someone was that excited about just seeing Ali, you should be at least that excited about Jesus!” But I think that kind of exhortation is counter-productive. It might pump someone up for a little while, filling them with an excitement for “All that I will do for Jesus” — but that would peter out and would not lead to lasting change.

Let’s consider what Jesus says in today’s passage. See what he compliments the men for: not for what these guys did, but for their faith. When Jesus saw their faith, he said to the paralyzed man, “Son, your sins are forgiven.” Jesus did not say, “Since you guys worked so hard—sure I’ll heal the guy! You guys earned it! You have my approval—big time!”  No, it was their faith that led the friends to do the hard work of lowering the guy down.

We do know that Faith without works is dead (James 2:17)
But don’t forget:  the works themselves earn you squat.

So, today, we do not  think that our being pumped up and doing extra stuff will get us extra points from Jesus. Instead, we ask God to give us greater faith. Then, our good deeds will be based on our trust in a Savior who already fully accepts us.