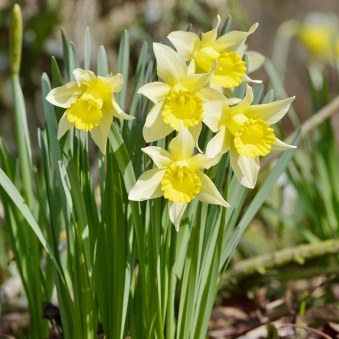 I expect to see daffodils in people’s gardens in early spring. They are welcoming signs of the change of seasons.

But this spring I saw something unexpected while walking in the woods across our street.

Wild daffodils in the middle of the woods.

My surprise flower encounter led me to reflect on what is expected and unexpected in how God works in our lives.

When we watch how God works does it look like a garden that is well ordered, predictable, manicured, and under control?   Can there be surprises or unpredictability in the kingdom of God? Let’s check in with Paul:

Personal testimony: My own life was struck by the Lord’s unpredictability. Back when I was a teenager and knew everything, I decided that Christianity was just a bunch of myths and fairy tales; I was too intelligent to believe such nonsense. But in my 20’s I was stunned to be knocked upside the head to see that Christ’s story is true.

For since in the wisdom of God the world through its wisdom did not know him, God was pleased through the foolishness of what was preached to save those who believe.   (1 Cor 1:21)

I heard this foolishness and suddenly it started to make sense to me.

Of course, Paul is being ironic in his use of the word “foolishness”. It’s only foolish from the perspective of modern rational logical scientific enlightened thinking.   But from God’s perspective becoming a Christian is the wisest thing that could possibly happen. Even though we can’t prove Christian faith beyond the shadow of a doubt, it is not unreasonable… Indeed, what stunned me was that there is evidence 1 that an individual who claimed to be God was executed, came back to life and was seen by many.

Dear readers, you are in one of two camps. You may already believe Jesus’ gospel is true and life-changing. Or you may be a skeptic as I was. Every day God challenges skeptical people…maybe you are being wooed today.

I refused to believe until Jesus showed me he is truth and love and said, “Come on in.” What about you?

1.  Evidence That Demands a Verdict by Josh McDowell